One of my projects at Riot Games (as I introduced in a blog post on the official Riot Games technology blog, “Technology Interns at Riot Games”) involved designing an extension to an internal application specification we have to describe services to allow engineers to declaratively define alerts on their application. The goal of the specification is to be human-readable for operators in different regions while giving programs sufficient information to automate the deployment of services and everything they require. Deployment at Riot Games is covered in this blog post (“Dynamic Applications: Micro-Service Ecosystem”), and our application specification is mentioned in this AWS Skill Point Episode (“Riot Games and League of Legends”) if you want to learn more!

✅ Update(2/25/2020): a new post (“Products, Not Services”) was recently published that elaborates on the specification I worked on, and briefly mentions my intern project! (emphasis mine)

The specification also includes all the metadata required to run and operate an entire environment. A growing set including configuration, secrets, metrics, alerts, documentation, deployment and rollout strategies, inbound network restrictions, as well as storage, database, and caching requirements. 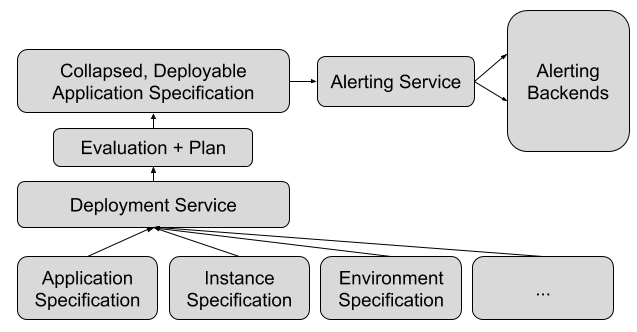 Rough diagram I made of what this stuff is supposed to do, as outlined in this blog post on the official Riot Games Technology blog.

So an idea I had as part of my extension design proposal was to allow users to specify “selections” from other parts of the spec and perform arithmetic on them as values in their alert thresholds. This would allow engineers to set a single alert that would alert if 75% of their packs die, for example, without having to use a hardcoded number and overriding thresholds in each instance or environment that uses a different pack configuration. The spec would look something like:

Values could also be selected out of configuration with this syntax:

Selections would be evaluated at deploy-time on a fully collapsed application spec, and the deploy diff reflected to the user would show the evaluated value for validation.

(Aside: none of the examples in the post are what the specification actually looks like, but the ideas are roughly the same)

The response to this feature was pretty positive, and it quickly found several useful use cases that helped simplify and clarify alert definitions in the context of an application for human readers. For example, in an alert on something like:

The meaning of the alert becomes immediately pretty clear, and service configuration a lot easier, with alerts automatically scaling off of a configured property. It also meant that a separate percentage metric on the queue size doesn’t need to be created and tracked to get this same feature without selection.

For this post I’ll just give a high-level overview of the implementation details. he core of the feature is in a Go string type I called EvaluableExpression that exposed the ability to evaluate the string on a collapsed application:

I tried two approaches to this. Both leveraged an awesome JSON selector library, github.com/thedevsaddam/gojsonq, and github.com/Knetic/govaluate (also awesome) for expression evaluation. Most of my work involved in making them interoperate by evaluating selectors first, and then performing the necessary arithmetic.

As sexy as this method was didn’t actually end up using this approach - I ran into serious issues when it came to selecting things out of arrays of objects. Because applications are collapsed in various ways, there is no guarantee of the stability of array properties, so allowing selection by index using standard Go syntax (ie myfield[10].value) was a no-go. Wrapping that in some custom syntax magic (like the myfield[key=value].value semantic in the final design) was also problematic, since for the Go parser to recognise this the index value would have to be wrapped as a string (["key=value"]), and feedback for this workaround was that it seemed confusing. It could have “escaped” it as a string, but it would have meant adding yet another pass over the expression that made the whole thing kind of convoluted. Configurations fields with dashes in them (my-field) was also problematic since the Go parser would recognise it as arithmetic.

So since I didn’t end up using the parser, I put it up as a gist! I still think it’s kind of neat, even if it’s not very practical. The implementation walks an expression like this:

The visitor would walk the syntax tree, collecting parts of the select expression from any SelectorExpr it encounters and return fully reconstructed selectors in a slice. A good chunk of the work is done by ast.Walk, which I leveraged by simply implementing the ast.Visitor interface.

It was kind of cool finding out that Go offered its AST parser as a library, and it was fun putting the stuff I learned about syntax trees while working on Durian to semi-useful use… but in the end Approach 2 was much more practical.

This approach leveraged govaluate functions, which is the reason for the SELECT syntax (which serves as the “function”) in the final design. It consists of just 2 passes, and is far simpler than my first approach:

Things get a little hairy in the getFromJSONQ function, however: this function would have to handle the special array selection syntax that matches on specified keys (ie SELECT(array[key=value])). It involved some finicking to parse out the key and target value, and some hacks to get the appropriate subdocument from the gojsonq library’s documents, which I shall leave as an exercise for the reader

But with that out of the way, this implementation kind of… just worked. Woo!

There were still complications about when in the deploy pipeline this evaluation should occur, and how specifications should be stored (evaluated? unevaluated?), and so on, but yeah, this post covers the gist of the idea.

As a follow-up, since I wrote this post during my internship but held off on publishing until the official post was released - since then I’ve discovered antonmedv/expr, which seems to cover a similar problem space.