messing around with Uber's deck.gl in a 2-day quarantine hack

So started this little visualisation project in earnest on April 5th as a personal stretch goal for a course project I was working on, and stopped when I handed in the things that were actually due for the assignment on April 7th. It was a lively period of trying to get everything to work: wrangling data, fiddling with libraries, all the good stuff. Featured in this post: some Python + Notebooks, BigQuery, React, Uber’s deck.gl visualisation framework, and GitHub Pages. 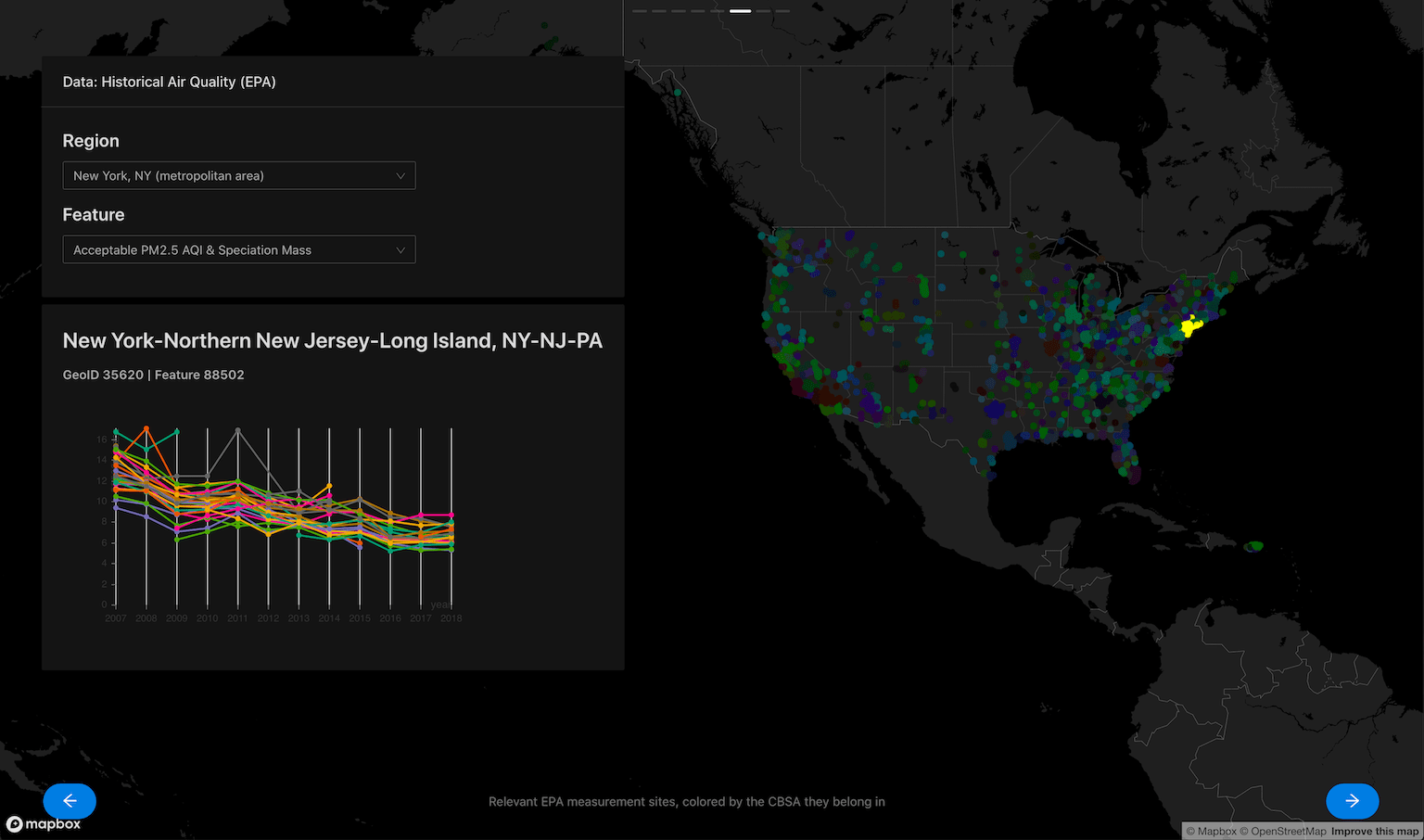 You can probably skip the first section of this post if you just want to see a brief writeup of the work behind this screenshot (or just go straight to the final website). As always, please feel free to leave comments and questions on this post by highlighting some text!

# A Stroll Through Memory Lane

I’ve always wanted to make pretty things, but the tedium of front-end always proved rather intimidating. My time with nwPlus did get the ball rolling though - implementing a nice design and seeing it come to life was quite satisfying.

I tried to learn more on making nice user interfaces briefly with my cancelled project, Timelines, and when I went to Riot Games last year, I tried yet again with a project that has been in limbo for a while: Seer (I didn’t even do a writeup for this one yet 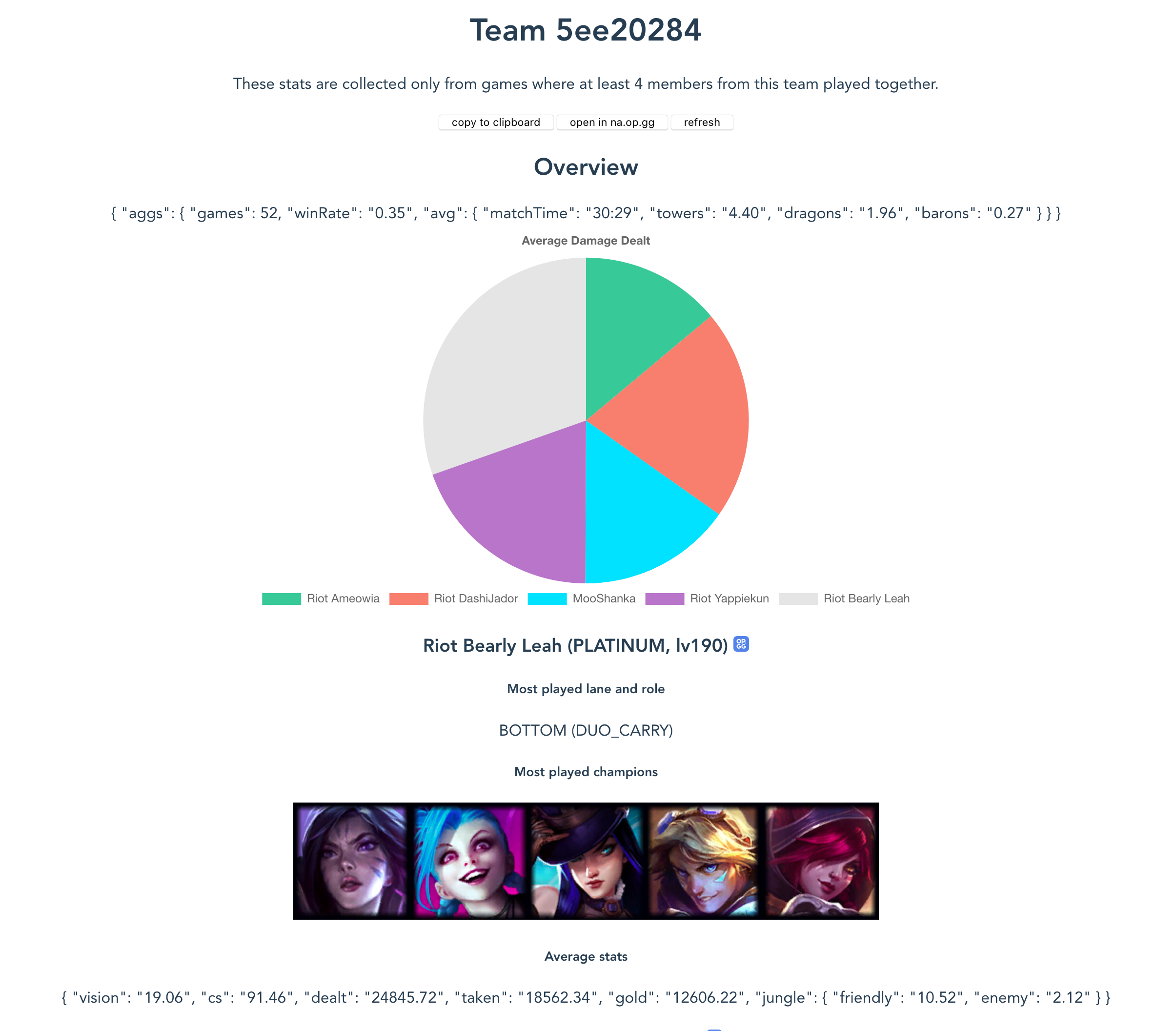 The state I got Seer to last summer - surpisingly still accessible at time of writing! Guess I never took down my Heroku instance.

As you can see neither of these projects made it very far, since I got caught up making my backends all well-architected and stuff. I did get some traction with gobenchdata, which was a simple visualisation generator for benchmark results over time, but that wasn’t a super sexy project or anything.

Fortunately, I finished my first intern project at Riot Games with some time to spare so I decided to dive into the making of pretty things more - this time using a design library that was used by my team, Ant Design, and focusing more on data visualisation. My team was very supportive of the project and I got the go-ahead to hack on it for about 2 weeks of my internship which was awesome. 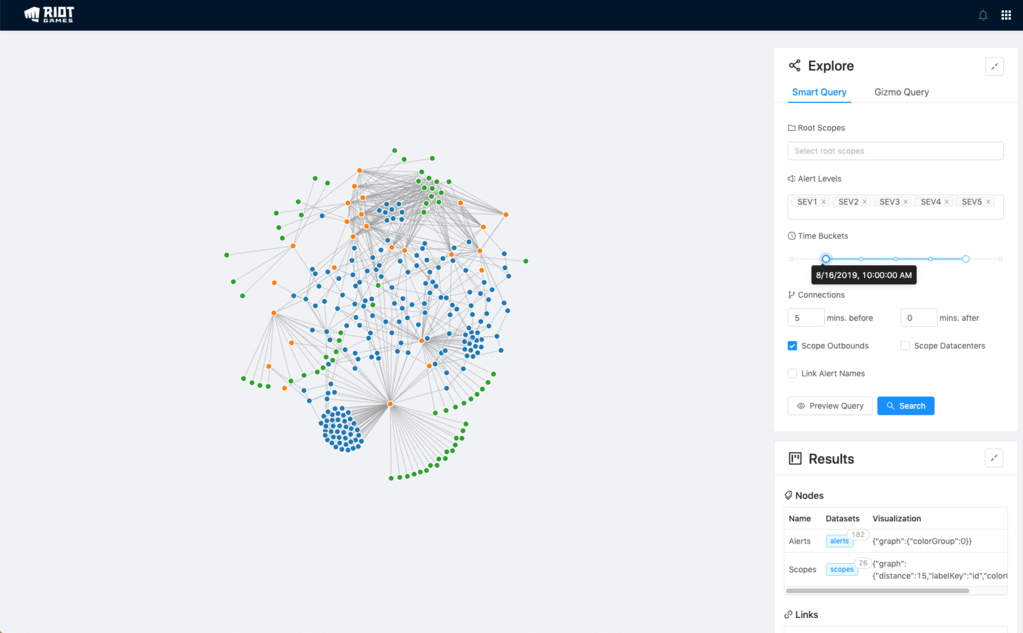 The alert visualisation tool I made, as seen in a blog post I contributed to on the official Riot Games Technology blog. See my Riot Games recap for more!

Since this was a lot of fun, I asked around about data visualisation, downloaded some books, failed to sign up quickly enough for my university’s visualisation course, and proceeded to not do much on this front for almost a year.

So this semester, to accompany the final project for one of my courses - a small analysis of societal changes and air quality trends - I decided to give it a go again.

I often get asked: so what’s the best way to make a website? Do I need some GCP? Some AWS? Some MongoDB? How webscale????

I honestly think for the vast majority of folks the answer is just no, when what they have in mind is a simple portfolio or a showcase or a product website or a signup page. I’ve found that something as available as (and as free as) GitHub Pages alone provides everything most people need for simple use cases, and there are affordable services that can fill in the gaps for slightly more complicated needs.

In a similar vein, when it came more recently to me procrastinating my final project by spending a bunch of time attempting to build a rather extravagant and overkill website when all I needed to submit was a slideshow, of course I had to live by my own words and do this all entirely as a React single-page application hosted on GitHub Pages (including using Pages to host my data!)

For this particular project we were required to choose some datasets and do some analysis on them. We chose two datasets available on Google BigQuery datasets, the American Community Survey (ACS) from the US Census Bureau (it’s similar to the census, but includes data for every year) and the Historical Air Quality dataset from the EPA (Environmental Protection Agency).

Without a backend it’s not entirely feasible to query massive amounts of data every time a user loads up my website, so I had to do some aggregation to pick out the data I wanted (I mean, I had to do this anyway for the project). I did the majority of this work in Jupyter Notebooks.

This isn’t very exciting so let’s move on.

See the code for the web app here!

Project setups are a pain, so I just used create-react-app, and despite all its pitfalls I would honestly recommend anyone set on using React to just use it. I wish it came with automatic formatting configuration (it only offers basic style checks) but given my time constraints I didn’t bother setting it up.

The first thing I did is delete almost all the code generated by create-react-app, pick a UI library, set it up, and just stick with it. For a fast turnaround this was a great way to get the ball rolling, since React UI libraries often come with comprehensive setup instructions for create-react-app that you can follow without thinking. For this project I went with antd, a well-documented and (in my opinion) sufficiently nice-looking UI library for React. It came with wonderful setup instructions specifically for create-react-app, which is where react-app-rewired came in (this came in handy later for some other changes I made to the base create-react-app configuration).

I structured the entire app around the antd carousel, where each slide is a React component. Data gets loaded upon initialization from two Contexts and is provided to slide components.

A wrapper SingleLoader abstracts away the work of downloading data and providing it to the Context - see the code for more details.

Each slide can subscribe to the ACS or EPA data (or both!) as needed by initialising as a consumer of the context:

I then set up deck.gl alongside the carousel:

Each slide is provided with a callback that can be used to update the map state by providing a new viewState or new layers to render. A viewState defines where and how the camera is looking at the visualisation - for example, the introduction slide sets the following viewState and layers:

Then, when you visit the website and land on the intro slide, the map loads up like this: 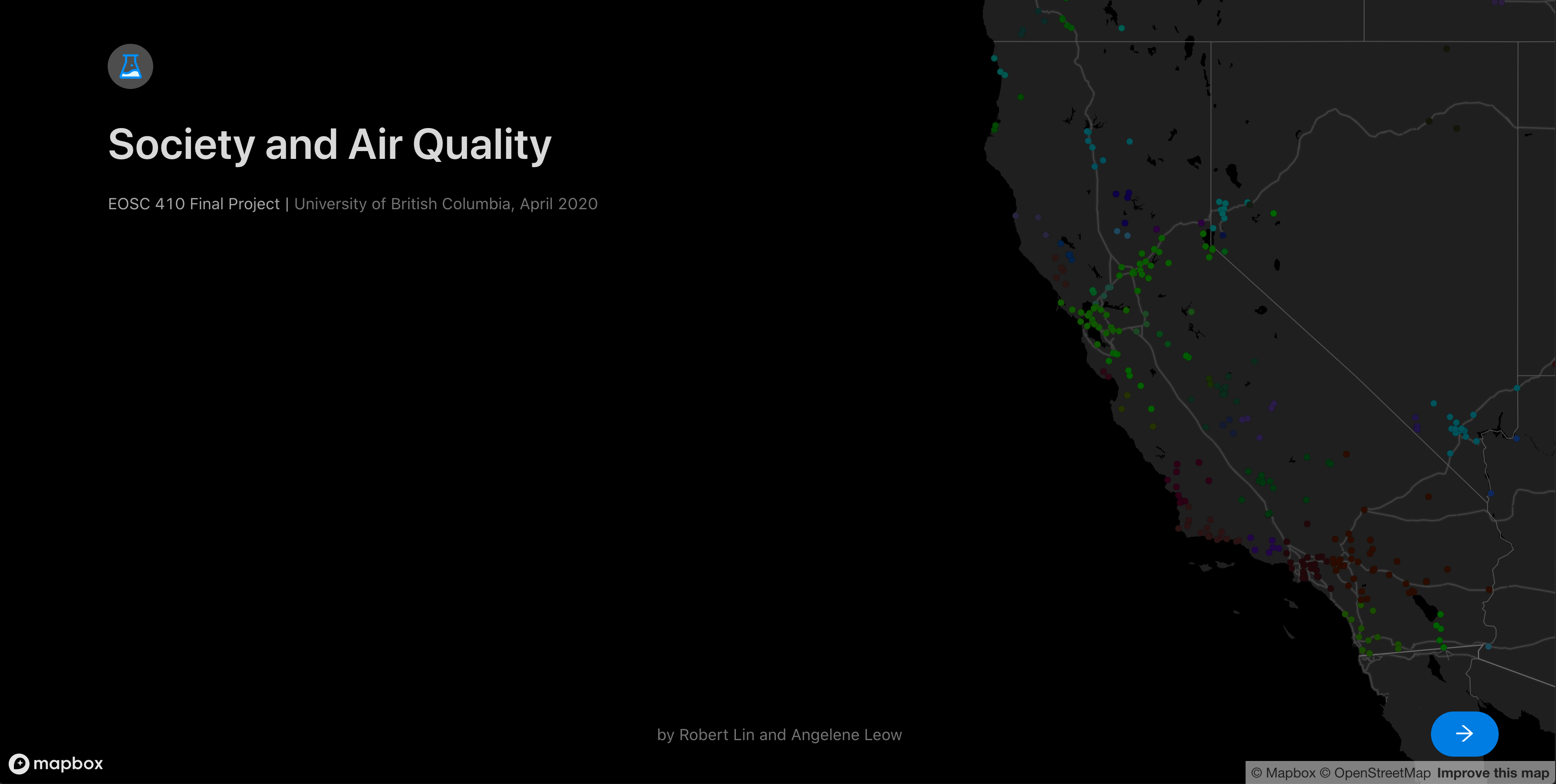 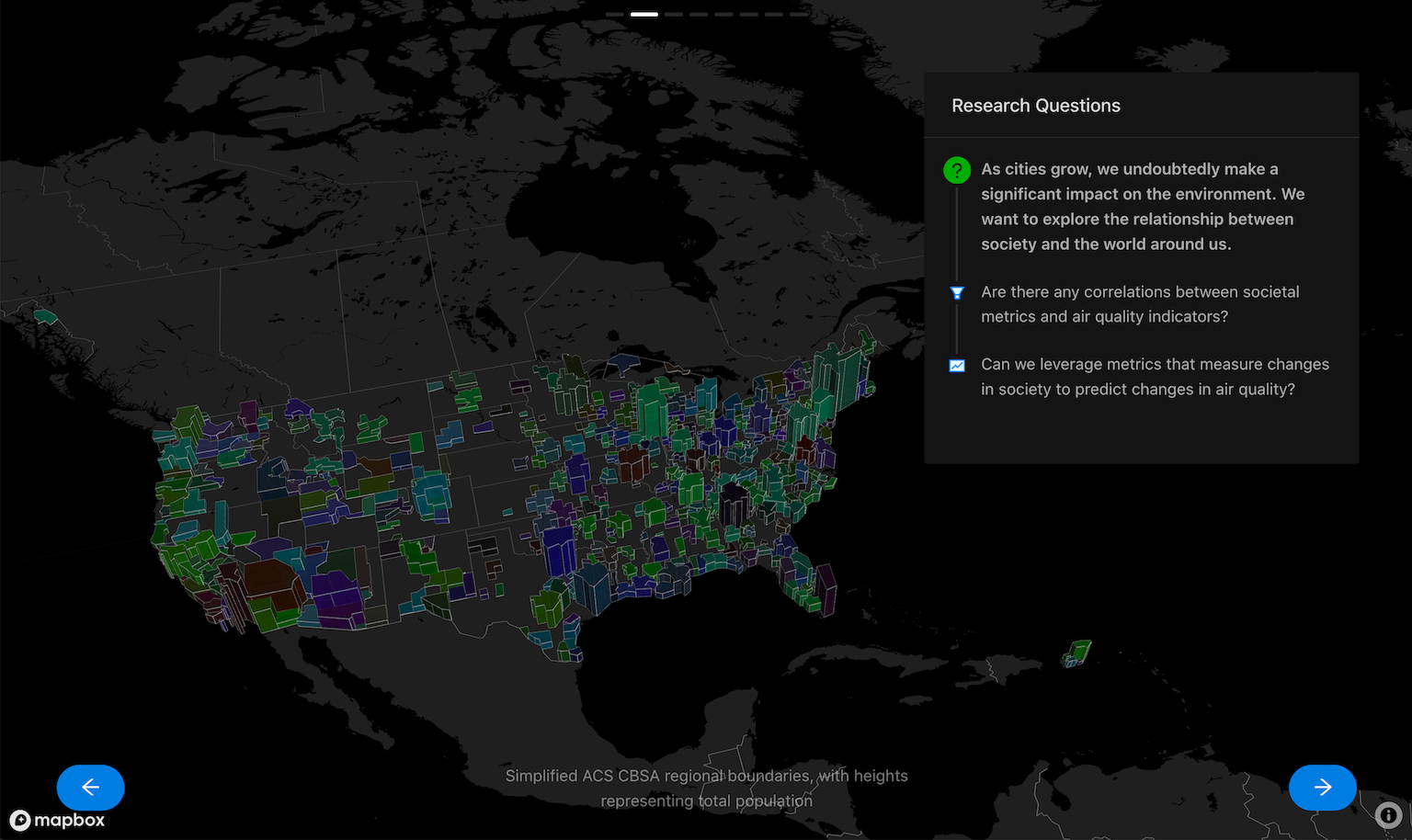 Also note that thanks to antd, positioning nice-looking elements all over the screen is pretty easy, and offers a lot of knobs to tweak to adapt your content across different screen sizes. I didn’t try too hard to make it mobile-friendly, but it’s nice to know the capability is there and that you don’t have to do it yourself. 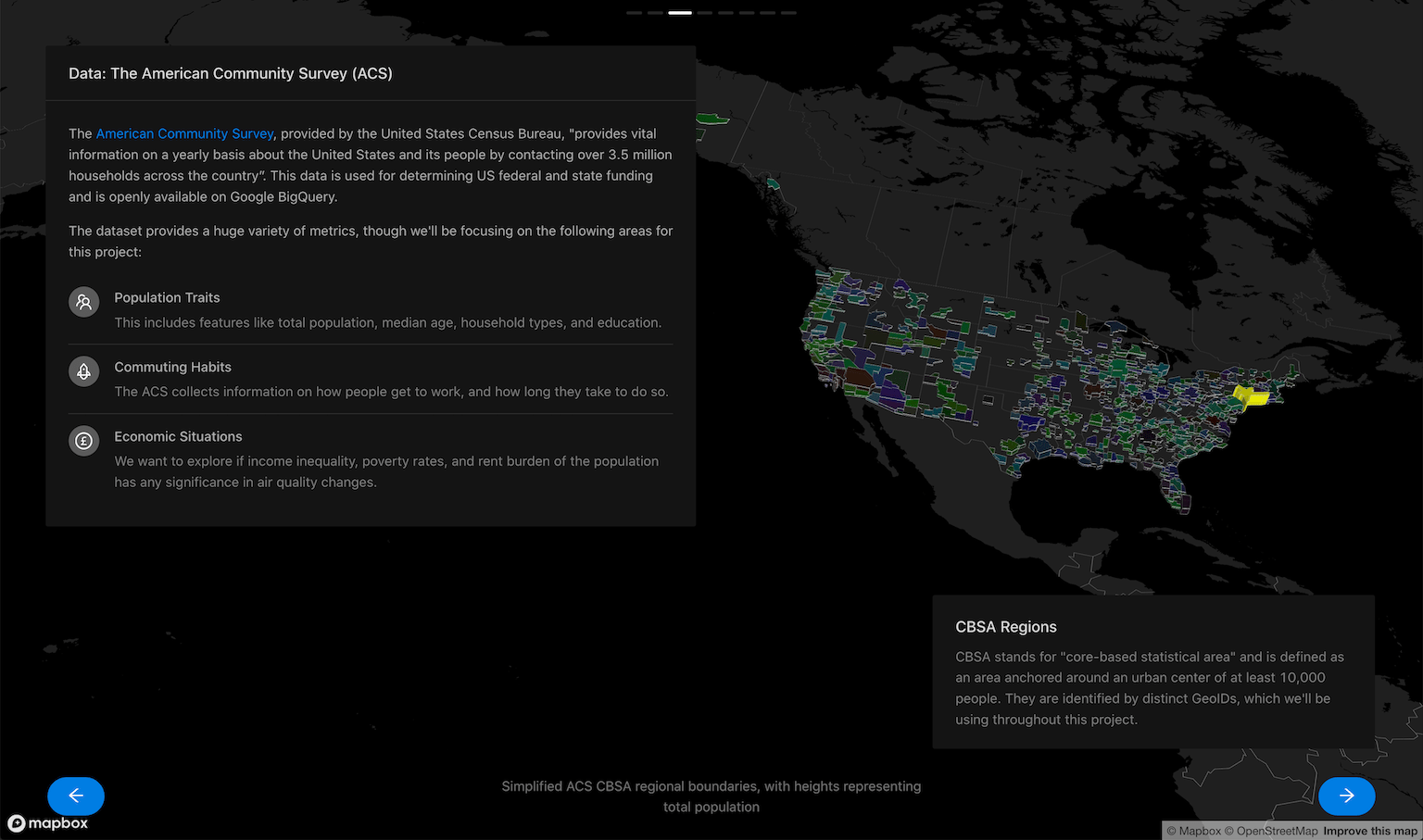 This is probably my favourite slide - see the source code here. This particular slide only took 83 lines of code on its own!

While cool, unfortunately it turns out that this setup is probably a big mistake. Here’s how I wrote the callback:

As noted in my hasty TODO, a huge problem arises in my state in between map updates and keeping track of what slide is currently active, the following happens on each render: 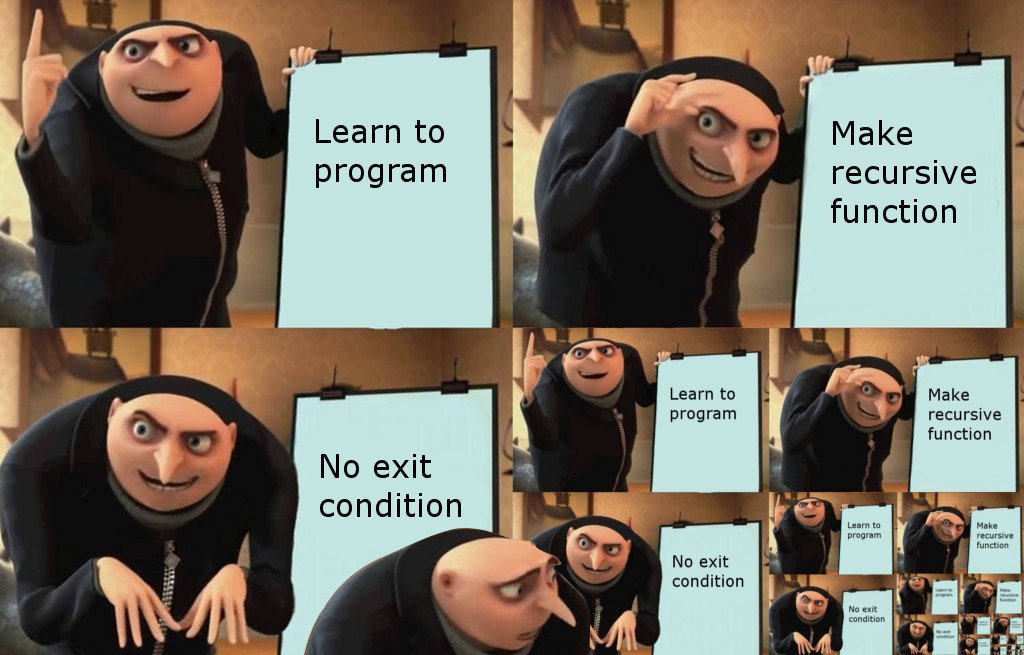 I hacked in an updateID to prevent a slide from making multiple map updates, but it also means that later on for my data exploration slides, the map is not interactive - a slide cannot make more than one update at a time

This really kills the vibe because I had wanted a slider on the panel to let you slide through the entire country’s data over the years, as well as highlight selected regions, and show different data on the map based on the selected parameter. 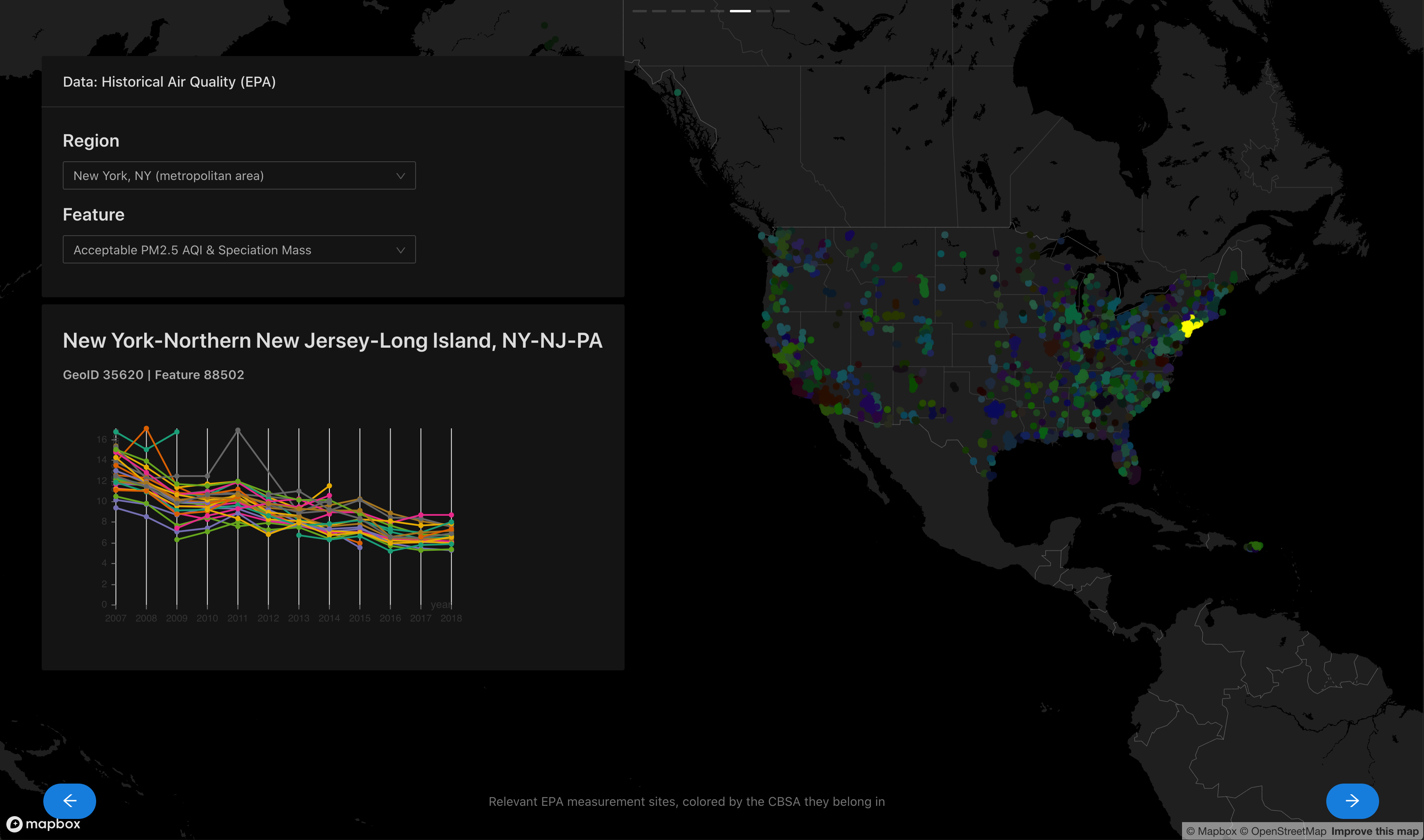 I’ll have to revisit this at some point - I’m sure there’s a “right” way to do this, and that I’m just holding React all wrong, but I’ve already spent a lot of time getting everything to this point so for now I’m just stuck with a rather uninteractive map.

✅ Update(4/10/2020): I spent some time fiddling with this and managed to get some basic interactions working by moving context subscription to the topmost level (I suppose rendering it pointless, but oh well) and removing all mapState depenedencies from updateMapState. Slides then check for loading/error state, and if they are selected, call updateMapState through useEffect. Check out the commit here! It’s not very clean, and I still can’t get map transitions working so I suspect I’m still doing something wrong, but it’s something. 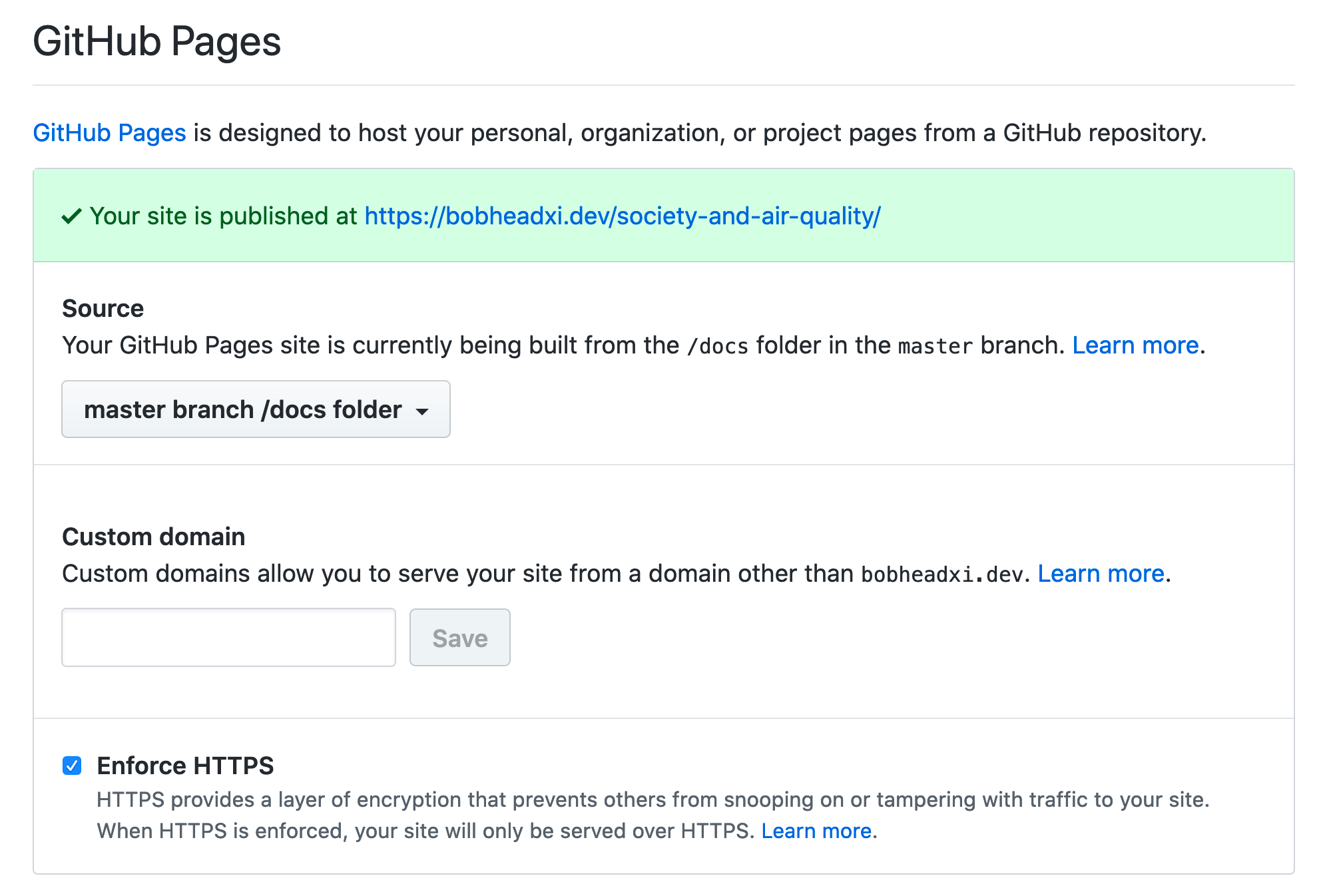 You can find this page under repository settings on GitHub.

On the React side (which I’ll get into soon!), I’ll just point out that you must make two adjustments when using GitHub pages + the /docs folder:

Note that react-app-rewired is equivalent to react-scripts from create-react-app, and was set up so that I could customise the antd theme.

And that’s all you have to do! Deploy your pages with a npm run build and push it to master, and it’ll be available on the world wide web - all for a grand cost of $0.

If the screenshots so far weren’t satisfactory, the entire unfinished website is available at bobheadxi.dev/society-and-air-quality. Not everything works entirely as I want it to at the moment, but enjoy!

Writing this up has also made me realise this all looks kinda easy. Did this really take me almost two straight days of work? I suppose it’s a lesson that in between reading documentation and getting through small issues or bugs or misunderstandings and all sorts of miscellany, time can fly by rather fast, and it’s easy to underestimate work.

Or maybe I just need to git gud as they say